Skip to content
It snowed here last night.  Not the pretty, fluffy, dry snow that I love so dearly.  The wet, drippy, mushy, messy snow.  School was canceled, leaving us with a day to do errands, leisurely enjoy the day, work on some projects, and day dream of the contrasting weather.  Remember that lovely 73 degree weather last weekend?  Yeah, ate my words.  I was daydreaming of Savannah this afternoon.  We were there in April of 2011 – the last trip before Greta arrived.  Below are some highlights from that trip.

They are glorious trees!

This live oak is called the Candler Oak. 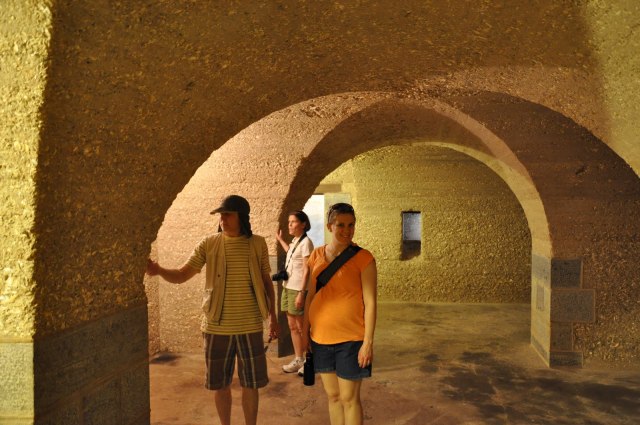 Yes, I told you I was pregnant.  We met my parents in Savannah, a place none of us had ever been before.  One of the places we made sure to visit was Fort Pulaski, just 15 miles east of Savannah.  This site is historical not only for its role in the Civil War, but also because the Union Army used rifled canon against the Confederates holed up inside, forcing them to surrender.  We happened to be there during National Parks Week, which allowed us free entrance.  This year’s National Park Week is April 22 – 26.

As always, when traveling, I am constantly learning.  I love living in the South and being able to soak up the abundant history.  This trip was no different – I learned of the important role that Savannah played in the Civil War.  On December 22, 1864, Union General William T. Sherman captured the city of Savannah after his famous march to the sea.  This had been one of the last major ports that had been in use by the Confederate army.  Sherman’s army left a wide path of destruction in their wake in order to bring suffering to the South, in hopes of ending the war quickly, however Savannah was left largely untouched.  Sherman sent word to President Lincoln, “I beg to present to you, as a Christmas gift, the city of Savannah, with 150 heavy guns, and plenty of ammunition, and also about 25, 000 bales of cotton.

There were plenty of Civil War era supplies to look at.

The views of the surrounding marshlands were impressive from the fort. 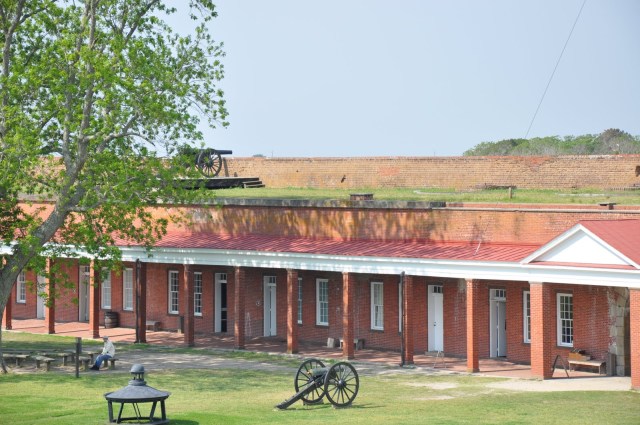 View into the fort from the top.

We also made a point to visit the Savannah National Wildlife Refuge, which is actually in South Carolina.  The refuge has an interesting center with exhibits and a gift shop.  There are trails that spiral out from there.  Or, you can drive to more rural sites and walk along dirt trails in hopes of spotting birds, alligators, and the likes.  I do not recommend walking around with bare skin, especially if pregnant, you will be eating alive by mosquitoes.

We were lucky enough to see an alligator.  He leisurely swam around the marshy area for quite some time, allowing us ample time for quality photographs.  This refuge was once a rice farm, but is now since been returned to a wild state. 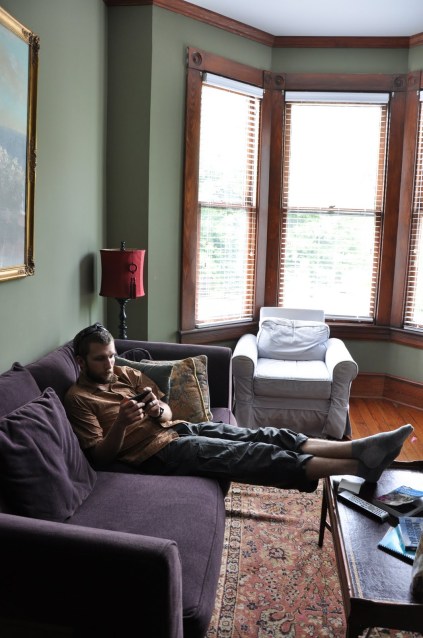 Back in Savannah, we stayed at a nice house, divided into three levels, called Suites on Lafayette.  We enjoyed having the space to spread out.

Eric brought his bike along.  Savannah is a great place to bike – mostly flat with areas easily accessed by bicycle.  Alas, I was a little past the biking point at this stage in pregnancy.  It was nice that he was able to run to the store without risking losing his parking space. 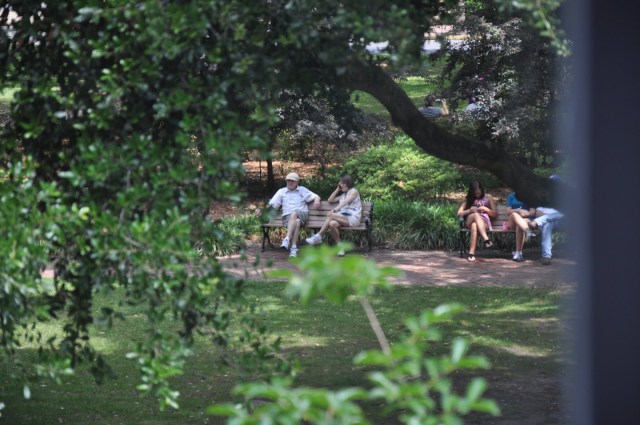 The house overlooked Lafayette Square.  One of Savannah’s defining features are its numerous squares that help to distinguish each neighborhood surrounding it.

The back side of the Suites at Lafayette had wonderful covered porches covered in sweet-smelling jasmine. 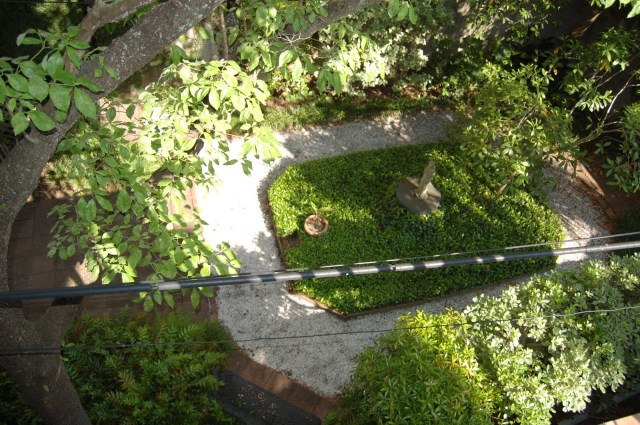 The porches overlooked the yard of the childhood home of Flannery O’Connor, the writer.

This is a view of the Hamilton-Turner Inn, kitty corner from the Suites at Lafayette. 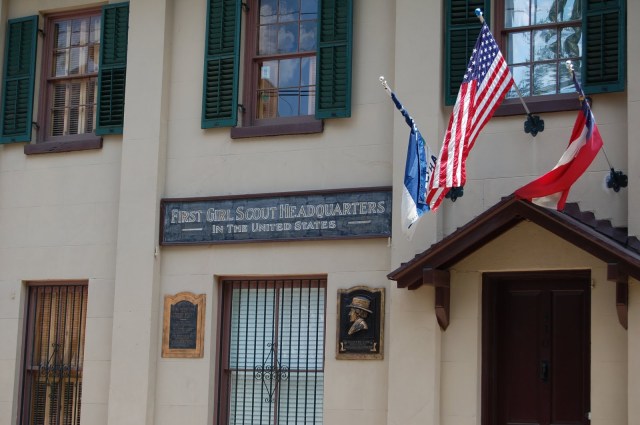 Savannah is always teeming with girls scouts – for good reason too.

Of course we had to be gawkers and stroll by the Mercer House, known for its role in Midnight in the Garden of Good and Evil.

The Davenport House Museum was an interesting tour with lovely gardens as well.  This home was completed in 1820 and marks the beginning of Savannah’s conservation of historic homes.  Some of the highlights of this home are the oval dining room, the curving double front staircases entrance, and the woodwork on the grand staircase.

There are plenty of places to eat in Savannah.  My pregnant self did not slow down to photograph any of the great places to dine.  One place that stands out was the Firefly Cafe, however.  They have a corn chowder with crab meat! 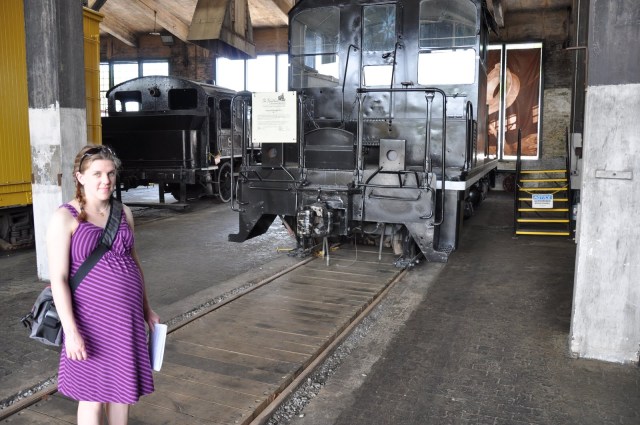 We appeased Eric’s interest in all things transportation and visited the Roundhouse Railroad Museum.  This is a large roundhouse that contains various examples of trains, engines, and other railroad memorabilia.  Despite my expression, I really did enjoy this museum.  It was just hot.  Really hot.  Did I mention I was pregnant?

Eric was all grins when we went on an actual train ride.  This train ride takes you on the roundhouse, which turns the train around on a track. 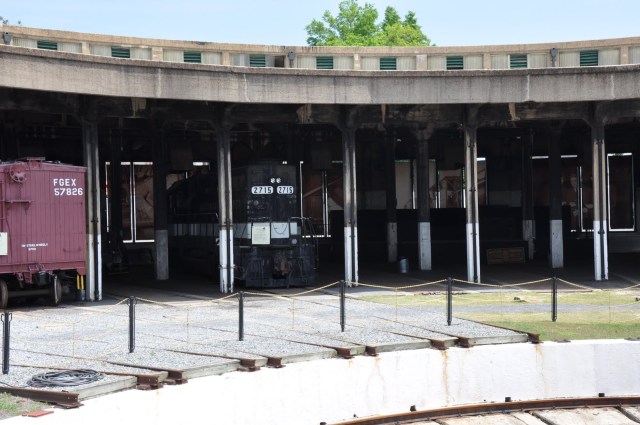 See, we are spinning around the face the opposite direction here. 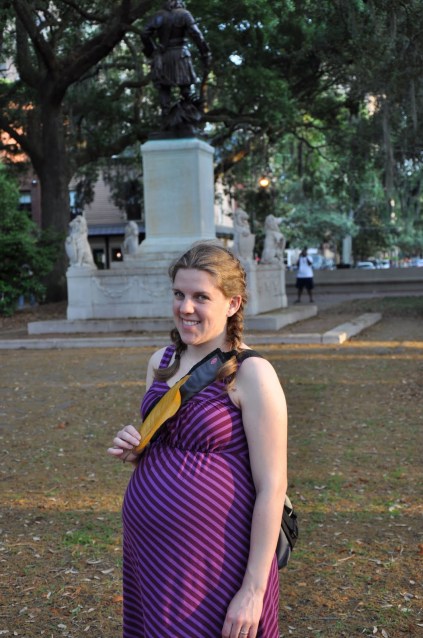 Later, we took one of those hokey trolley tours.  When you are pregnant, it is a good option.  We got off to see the Forest Gump square, also known as Chippewa Square.  That leaf is my feather.

Recognize the church steeple in the background?  The feather floats past it in the opening scene of Forest Gump.  Yeah, I didn’t remember it at first, either.  What is that ghastly white thing in the corner? Sorry! 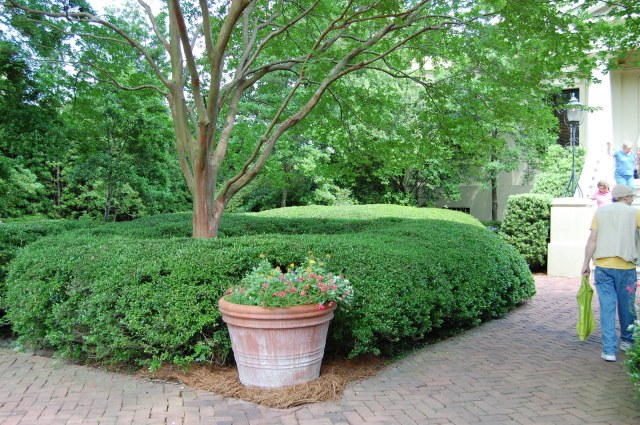 The Ships of the Sea Maritime Museum really impressed me.  Again, Eric’s love of all things transportation.  The house that holds this collection is called the Scarborough House. 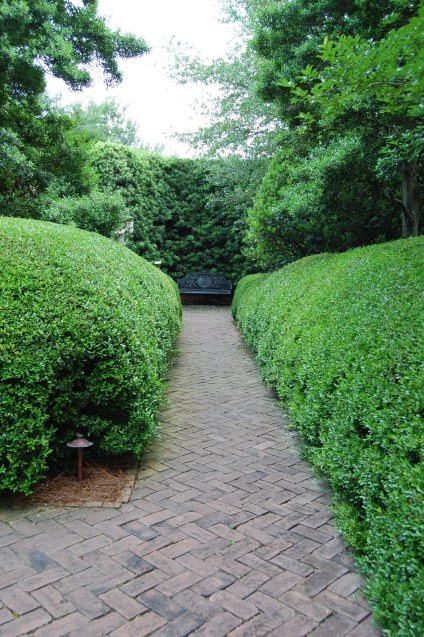 It has beautiful gardens with undulating bushes that bring to mind a heaving sea.  The house itself is dark and dreamy, like being in the underbelly of a ship.  The collection has an impressive array of model ships, paintings of ships, scrimshaw, and other various maritime items.

We did find time to make a quick trip to Tybee Island.  Alas, with no swimsuits, towels, or kites, we were left to only watch the swimmers.  The surf was steady and the wind strong that day – I was fine just sticking my toes in the sand and watching the fisherman line the pier.  This was a much more touristy beach spot than I had realized. 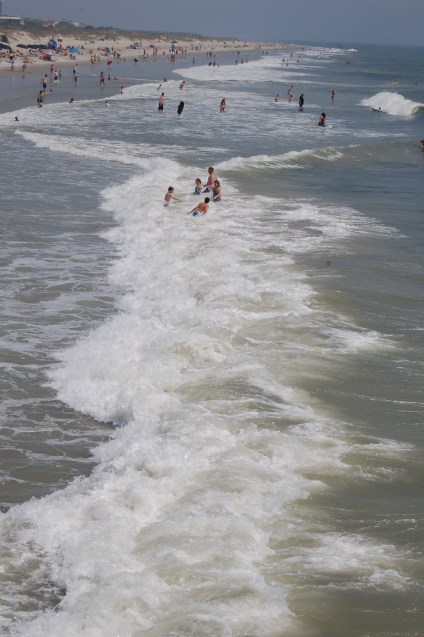 The beach was nice, but the charm of Savannah was the real treat of this trip.  We met a friend for lunch who was currently attending Savannah College of Art and Design.  Her stories of this lovely place were exciting to hear.  With the impending birth of my daughter, this was a perfect way to wind down the trip.

Savannah was the perfect spring get away – plenty of walking, eating, art, sight seeing, and relaxing.  Hopefully, sometime in the near future we will get to the sister city – Charleston. 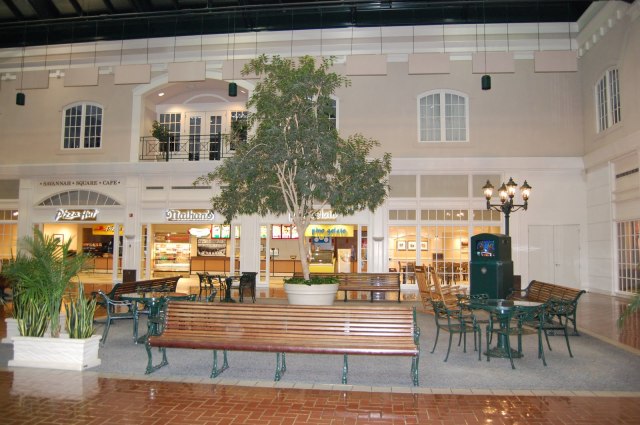 Even the Savannah airport has a square inside!  Of course we did visit Forsyth Park and the iconic fountain, however the image seems to be missing.  I will keep hunting.  Until then, visit this site to see the spectacularly famous fountain seen on all postcards, key chains, and brochures of Savannah.

What is your favorite day dream vacation spot?  I think mine is still Key West.