Skip to content
These waffles are my go-to waffle recipe for many reasons – they are better than store bought by far, they are light and fluffy,  and they can be dressed up in a variety of ways.  In years past, before being a mom, I made them for Christmas morning breakfast a few times.  Now we save these waffles for weekends with family or friends.  If there are ever any leftovers I freeze them for weekday mornings. 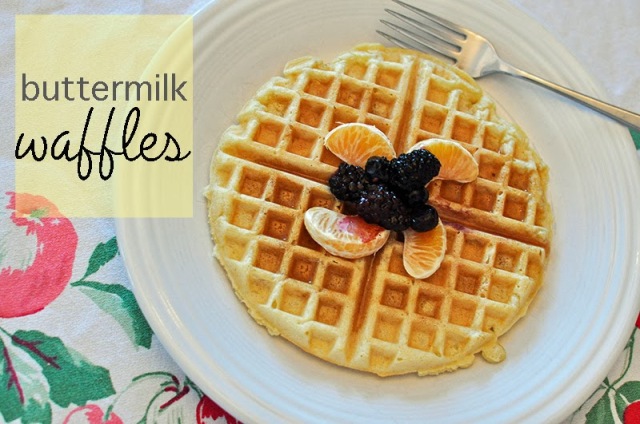 The secret to these waffles is in the eggs.  The eggs are separated during the mixing stages – the yolks are mixed in with liquid ingredients.  The whites, however, are beaten until stiff, but not dry and then folded into the batter just before cooking.  This makes them light and fluffy beyond belief.  No one can resist just one of these waffles!  I like to serve them with fresh fruit and maple syrup or Nutella.

I use almost a 1/2 cup of batter in my waffle iron.  I keep mine set on the lower side to prevent waffles that come out too brown.  This is also helpful if you are planning on freezing and toasting them later – lighter waffles will not toast as dark.

3. Combine the liquid and dry ingredients with a few swift strokes.  Allow to sit while preparing egg whites.  Beat until stiff peaks form, but not dry: 2 egg whites.  Fold egg whites into batter.  Cook according to waffle iron and preferences.

One thought on “Buttermilk Waffles”