Skip to content
This weekend we celebrated our 5th wedding anniversary, I did a practice run of chili for the Lindley Park Chili Cook-off on the 20th (more to come on this topic), we ate fair food, and we visited an art museum.

We headed off to the North Carolina State Fair in celebration this past weekend.  This was my first visit to the North Carolina State Fair, and I was not sure what to expect.  I was afraid I would compare this to the Iowa State Fair, and of course I did.  However, this is not a comparison post, so I will focus on the fun things we experienced at this fair.
It was a beautiful sunny day with cool temperatures.This was the first time I can say I wore jeans and a sweatshirt to a state fair.

We checked out some sweet potatoes first.

Then my sweet potato checked out the prize-winning steer.

Meat goats were entertaining – this one kept trying to eat the banner hanging behind its pen.

The UNC-TV tent was full of characters to pose with – we found Greta’s favorite!

Eric was lured into the food area – which was extensive!  We found a huge gummy bear.

And strange gummy things to eat?  I was perplexed…

The gourmet funnel cakes had something for us both – funnel cake for him and pumpkin flavor for me. 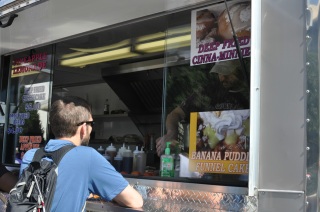 Banana puddin’ funnel cake was on the menu. 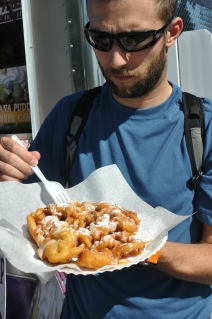 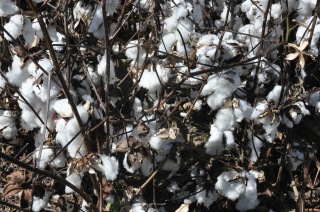 We stood next to a cotton patch as we ate up our funnel cake.

We saw loads of drying tobacco and listened to some bluegrass.
We found a saw demonstration next.  The entire contraption was powered by steam and leather belts, and when they blew the horn I thought Greta was going to scream.

Eric and Greta were enthralled with the demo and the gigantic sawdust pile. 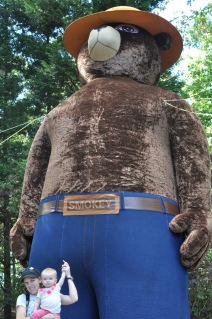 Smokey the Bear towered over us.  Did you know North Carolina is the cradle of forestry? 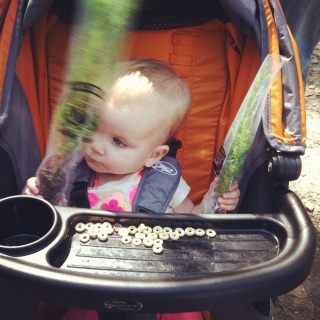 Greta got two free saplings – a juniper and a loblolly pine – the state tree. We planted them as soon as we got home.

This beautiful lake, wooded area, and mill were at the entrance to the state fair.  We crossed a couple bridges to actually get into the fair grounds.  It was a nice quiet area of the fair. 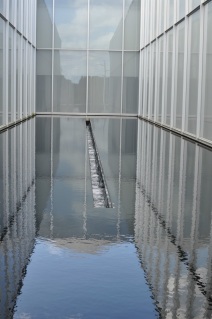 After we were exhausted of the crowds, we headed over to the serene North Carolina Museum of Art for a late lunch.

This confetti zebra cow was outside in the courtyard.  I was hoping to show Eric the trails around the museum, but Greta was too tired and ready to head home.  We had a great weekend – hope you can make it out the fair before the 21st of October.