Skip to content
Eric and I went to DC last weekend to catch up with a couple friends – Aaron and Elliot.  We drove up on Friday and stayed in a great hotel – the Double Tree Inn – overlooking the Pentagon.    When we arrived, we were told that we had been upgraded to a junior suite due to the staggering amount of teenagers staying on our original floor.  The junior suite had a balcony overlooking the Potomac River and if you looked really hard, the Capitol. 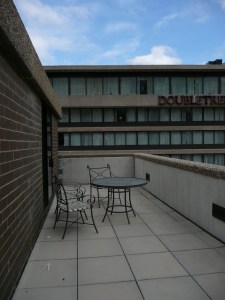 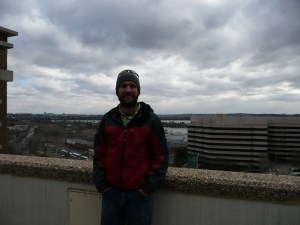 Eric on the balcony in front of the Potomac. 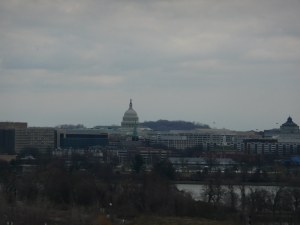 Zoomed in view from our balcony.

After we checked in we checked out the balcony and our room, we had a treat from the cooler, beverages specially made in North Carolina with Aaron and Elliot.  Later in the evening, we met up for dinner.

The hotel had an amazing restaurant, The Skydome, on the top floor that was all windows and rotated once per hour.  The movement was slightly detectable at first, and then very apparent when an hour later we were back at our starting point, with no food, and the same bottle of wine.  Great location and views, but service and food were ok.

After dinner it was Elliot’s time to show us his town, or as he calls it, “the most powerful city in the world.”  We went to a couple places, the first an Irish place.  Ok.  The second, more notable, The Big Hunt.  Just as we got ourselves settled in the basement area, called Hell due to its decor, we were asked by someone if we were a part of the CIA party.  If I lived in DC, this would be my Sticks and Stones.  Anyway, after a night of interesting restaurants, good drink, and hilarious discussion, it was a great first night in DC.

Saturday we got up late, which was nice, since sleeping in isn’t normally something I do.  The next morning we had breakfast at the hotel, a mistake we would learn from.  It was ok French toast at outstanding French toast price.  But hey, that is hotel food for you, when you are desperately hungry and craving caffeine, you will suck it up.

We headed out to do the Mall and museums for the rest of the day.  We started at the National Archives.  The impressive dimly lit room holding our nation’s documents never fails to impress me.  Some countries have their crown jewels, we have our sacred words.  I probably could have spent an entire day reading over every shred of paper and parchment the Archives.

We headed over to the Washington Monument, but all the tickets for the day were gone.  We took a few photos there, I used my Diana quite a bit and will upload those when I have the prints.  We tried to get close to the White House, but it was closed off and we found out later that evening that there was a lawn press conference.  We tried to go to the Bureau of Printing and Engraving but it was not open on Saturday, next we tried to go to the Holocaust Museum to see the Nazi Propaganda exhibit, but the line was half a block long.  We were too impatient to stand in the wind and cold for as long as we thought it may take to get in.  It would have been a really good show to see.

We headed over to the Smithsonian Natural History Museum next. 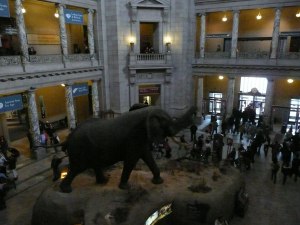 These museums always tie with art museums – who doesn’t love stuffed animals, bones, gems, and meteorites?  There was a beautiful photography exhibit, Nature’s Best Awards 2009.  I got lost in the exhibit, Written in Bone, an exhibit on forensic science on bones and remains.  These cases were focused on the people living in Chesapeake Bay during the 17th century.  This was me geeking out at my finest.  You may not know this, but for a while I really wanted to be a forensic anthropologist for a while during middle school and high school.  I have always been fascinated with bones and art, and the facial reconstructions were something I always thought I may really enjoy doing for a living.  Of course we also saw the Hope Diamond, but to me this was not the highlight of the museum.  For me, the Giant Squid immersed in fluids and the BONE HALL!  I went nuts with the camera in here.

Eric with the fish. 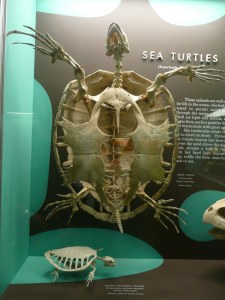 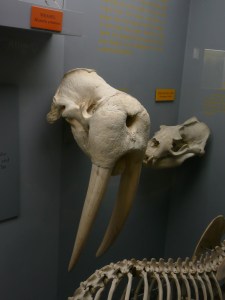 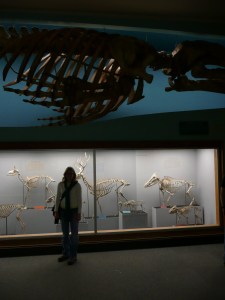 Me loving the skeletons.
Then of course there was the other childhood obsession of mine, rocks!  A good story to illustrate this obsession comes from my days at Living History Farms day camp.  At the end of camp one day, my counselor told my dad that I needed to get a smaller cooler for my lunch because I was having a hard time carrying it by myself (mind you this is maybe 2nd or 3rd grade).  When we got home my dad opened the cooler and it was full of rocks I had collected throughout the day.  So the second best part of the museum was the gems and minerals section. 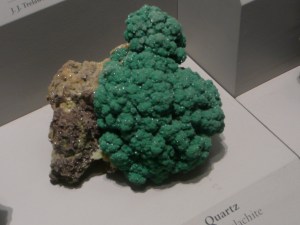 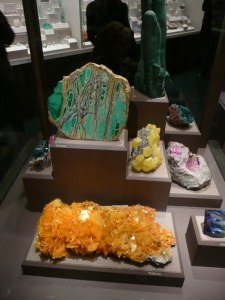 Interesting variety of colors in this case.
We were at the Smithsonian until close, they kicked us all out at 5:30 pm.  Eric and I had tickets to see a show at the National Geographic Museum at 6:30 so we had a little time to kill between the Smithsonian and there.  We decided to walk instead of taking the Metro.  Along the way we found tea and a scone, at 6:30 we were in line to see the Terra Cotta Warriors from Emperor Qin’s tomb.
This was a selection of the life-size warriors, musicians, entertainers, and other artifacts that were discovered in 1974 outside the city of Xi’an in China.  The first emperor of China built a massive tomb complex that is still being excavated today.  The show was impressive, however, the full scale of the tomb complex cannot possibly be felt in this exhibit alone.  I bought a DVD to show my students that starts to scratch the surface of the massive undertaking this must have been.  I am sure everyone takes this show in from different angles – I could not help but think of the labor and hours that went into creating these Terra Cotta figures.  These thoughts are undoubtedly due to my summer at Dalhquist Clayworks, working on Terra Cotta roof tiles for the local basilica.
We were not allowed to take photographs in the show, but they provided a nice replica at the end of the show in which you were permitted to photograph. 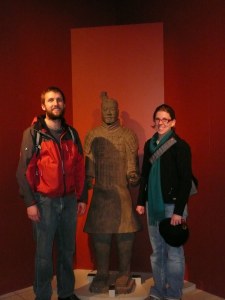 Eric and me with the replica Terra Cotta warrior.

For dinner on Saturday night we went to a place called Philip’s Seafood, a very interesting seafood buffet that was dressed up to be the perfect prom date place.  It was prime people watching and I have to say, the food was delicious!  After dinner, Elliot drove us around to see some of the monuments at night.  I have only ever seen them in daylight, the lighting and the sheer size of the monuments were grandiose at night. After the night tour, we headed back to our hotel to be surrounded by hormonal debate kids.  Why does it seem that whenever I am on vacation, I am surrounded by kids?  How do I get the hotel that is completely loaded with shrieking, running, texting teenagers?  Anyway, we sat around and enjoyed an adult beverage and adult conversation.
Sunday morning we got up and opted not to eat hotel food.  Instead, Eric and I had muffins, fruit, and coffee from the coffee stand in the lobby.  Eric and I headed over to the Lincoln Memorial first. 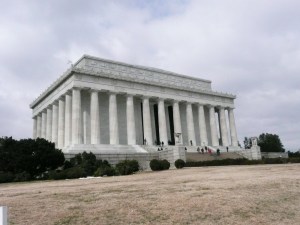 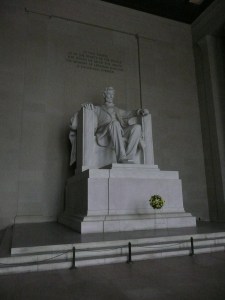 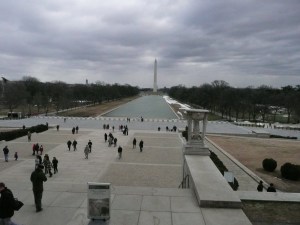 It was a dramatically overcast day, with spurts of sunshine that made the monuments almost eerie. 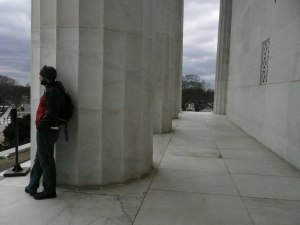 Eric looking out at the Washington Monument.
After the Lincoln Memorial, we headed over to the Jefferson Memorial.  On the steps of the memorial was a very cold-looking bride and groom taking photographs for their wedding.  Eric noticed she was wearing Ugg boots to stay warm. 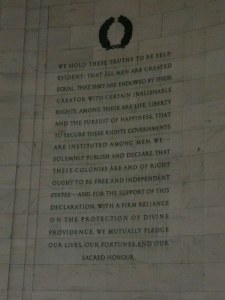 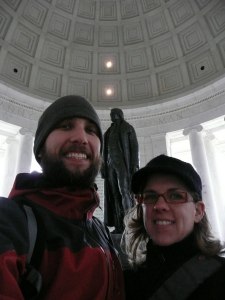 Eric is so talented at the self portraits.
After the morning’s mini memorial tour we headed back over by the hotel area for lunch.  I had some amazing pumpkin ravioli at a nice Italian restaurant.  There was an outdoors outfitter next to the restaurant, so we did the obligatory check out an REI-like store visit.  I got one nice photo of the boys smiling before Eric and I headed south again. 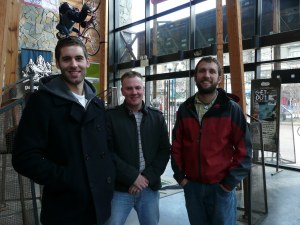 Now I am just waiting on the prints from the Diana camera, I took at least a roll of those.   What a wonderful weekend, I need more vacations like this one.  Round two: brew tour NC.