I wish I could come home to this as a snack every day after work.  It would be such a nice way to enjoy my afternoon.  Though, I know I would have some problems getting Greta to eat a healthier dinner with me chowing down on this dessert.  How many other moms out there are hiding in the kitchen eating something not as healthy to prevent child(ren) from wanting what you are eating instead of what you should be eating? Yeah.  Well, this dessert isn’t really all the bad.  I would share this with Greta, only thing is her palate consists of mac n cheese, yogurt, milk, bread, dried fruit, and food packets right now. 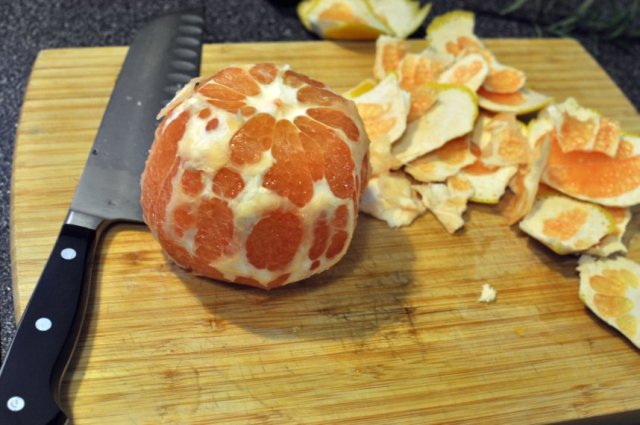 Cut 1 grapefruit in half.  I made the mistake of cutting off all the rind.  I wish now that I had not, it was harder to eat – the rind would have given the spoon something to scoop the grapefruit flesh out.

Place grapefruit halves on a foil lined rimmed pan.  Drizzle vanilla and agave syrup on top, about 1 spoonful of each, per grapefruit half.  Allow to soak in about 10 minutes. 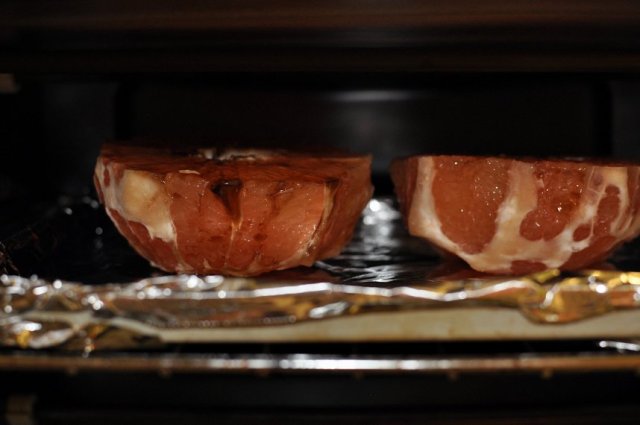 Place grapefruit halves on rack just under broiler.  I used the toaster oven for this dessert.  Broil for 25 minutes.

Do not worry – they will look blackened!

The chocolate and the tart grapefruit were a perfect combination.
Broiled Grapefruit with Chocolate Ice Cream – serves 2
1. Cut 1 grapefruit in half. Using paring knife, cut slits along membranes of fruit segments, from the center to the rind.  This will help to loosen the fruit and make it easier to eat.  Place grapefruit halves on a foil lined rimmed pan.  Drizzle 1 spoonful of vanilla and agave syrup on top, per grapefruit half.  Allow to soak in about 10 minutes.
2. Place grapefruit halves on rack just under broiler.  Broil for 25 minutes. Serve with chocolate ice cream of your choice.