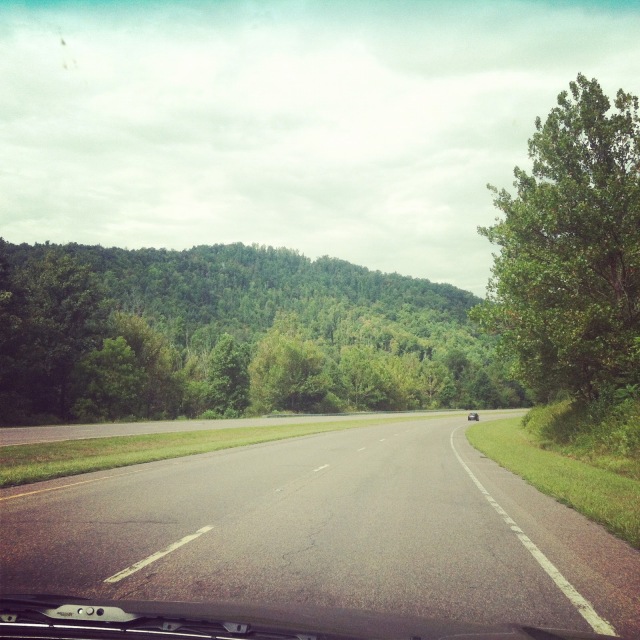 the best time for that last minute hurrah before summer is officially over, 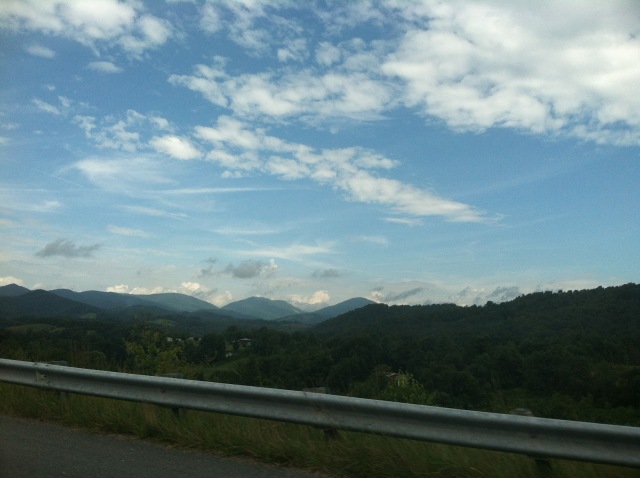 and the best last minute enjoy the great outdoors.

We headed to Damascus, Virginia for a ride on the Virginia Creeper Trail.  This beautiful trail is 34.3 miles long, starts in Abingdon, Va, goes through Damascus, and ends at Whitetop station at the border of Virginia and North Carolina.  The trail is what is known as a rail-to-recreation trail, which means it was once a functioning line for the railroad, but the tracks were replaced with a gravel trail in 1984.

After we loaded up with gear and snacks, we waited out a brief rain storm, and then we were off.

The first couple of bridges we crossed were beautiful – I knew we were in for a ride full of spectacular sights.

The first section of trail was mostly in the town of Damascus.  You couldn’t throw a stone without hitting a bike rental shop. 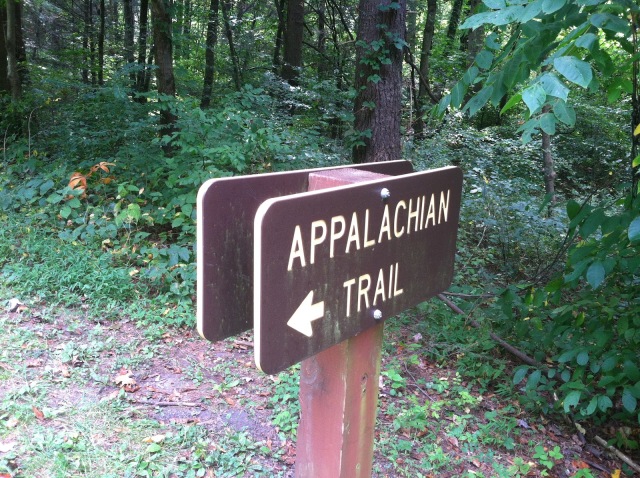 The Appalachian Trail links through Damascus as well.  Suddenly the hiker inns, laundromats, and hiker-friendly shops made sense. 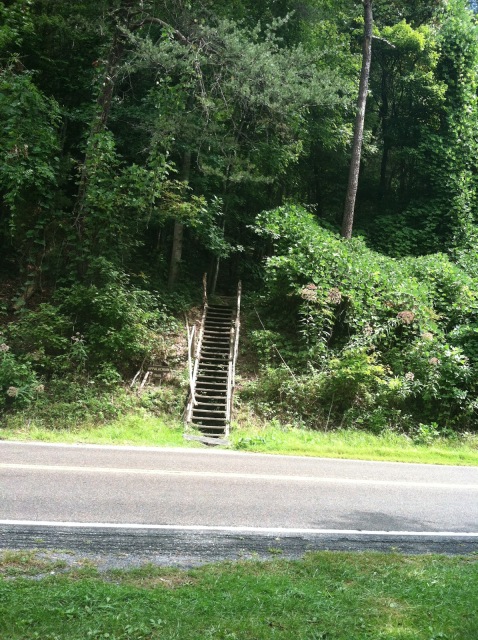 The steps to the Appalachian Trail.

Most of the trail was wooded and fairly typical of the lush North Carolina forests.

We rode through a section of cleared out meadow.  The trail is bordered by private property and you can even find ice cream stands literally on the side of the trail. 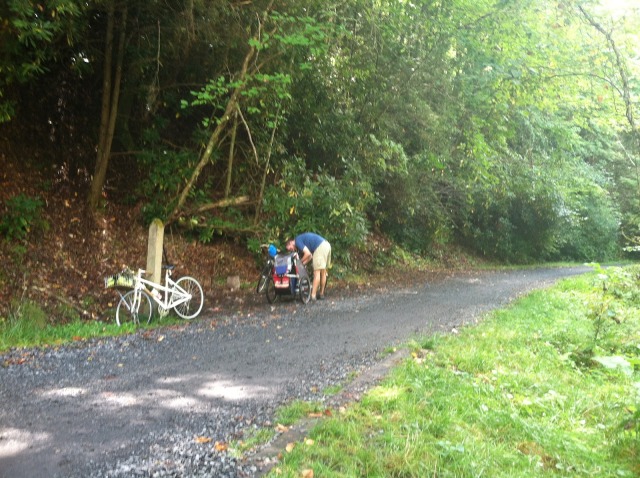 After an hour and a half of riding Greta needed a snack.  We stopped near a nice bridge to feed her.

We found this stone marker and a rake.

Even Greta got muddy in her trailer. 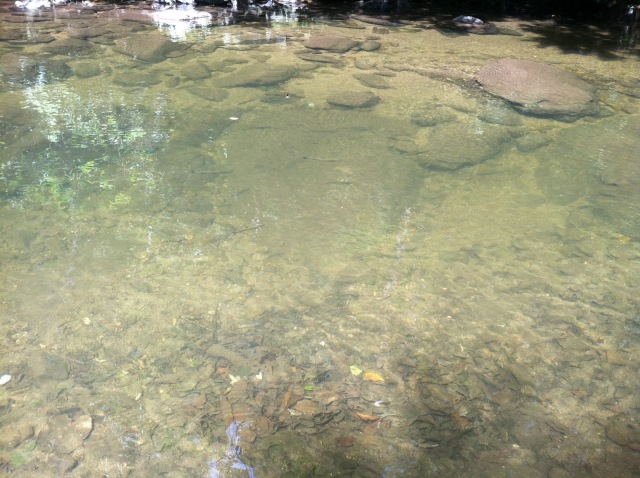 The river was full of good-sized trout that were easily seen from the bank. We saw quite a few people biking with their fishing poles.

Greta tried to stay entertained with her plastic Easter eggs.  In and out of the side pockets.  Repeat.

Poor girl was getting tired of being her trailer, so we decided to head back.  It was a short ride, but worth it.  While we did not make it to the highest point of Whitetop Station, we have something to look forward to on the next trip. 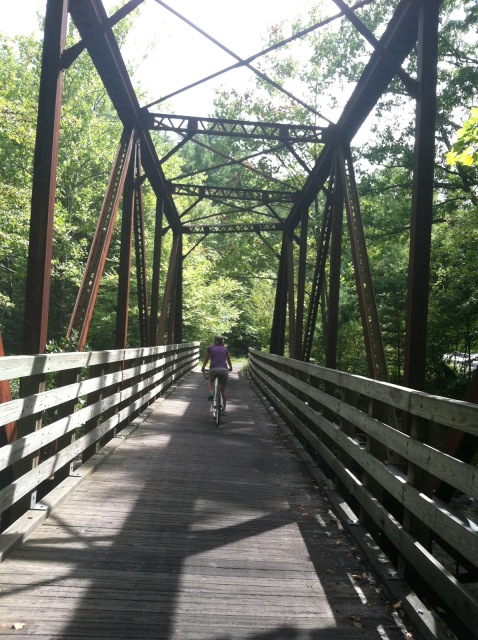 Somehow I did not get as muddy as Eric did.  His tires are knobbier. 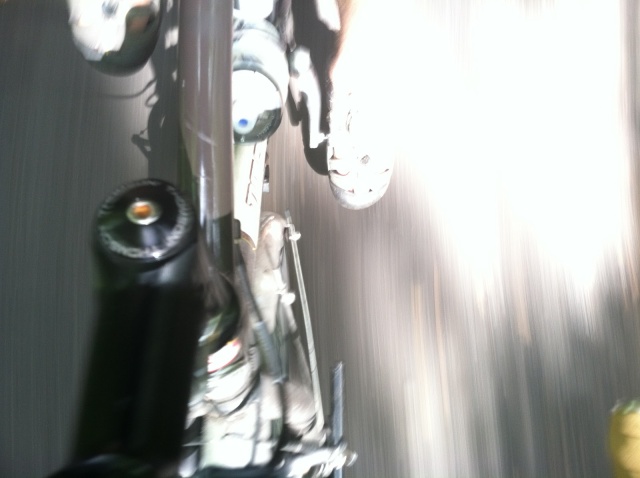 Naughty Eric taking photos while riding!
Overall it was a beautiful ride.  If you ride from Damascus toward Whitetop Station as we did, be prepared for constant pedaling due to the slight incline.  Also note that most of the people who ride this trail take a shuttle to the top and ride down.  Think lowest common denominator of riding.  Granted this was a busy weekend, more so than normal, but I was nervous about the crowds and groups barreling downhill 2 and 3 abreast.  At one point I actually feared for my life as a teenage boy almost ran me off the trail because he failed to move to the right or slow down.  For bike snobs, think Disneyland on bikes.  Next time, I resolve to stay overnight and leave early, before the shuttles head out.